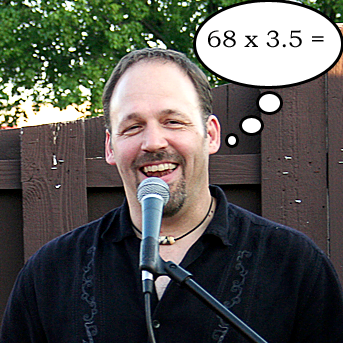 Just finished updating our song list and the grand total came out to 68 songs.

The quick math rule of thumb we use is that the average song is three and a half minutes long. So take 68 multiplied by 3.5 and you end up with 238 minutes worth of music, or just 2 minutes shy of 4 full hours…If we played them back to back, non-stop with no talking in between. Which never happens.

Depending on the gig, we play anywhere between 1 – 4 sets and a set is either 45 or 50 minutes. That means we basically have 5 full sets worth of music at our disposal.

So how do we pick a set? It’s different every time. While we have some “standards” (considering we play covers, does that go without saying?) we use most of the time,  what order they go in depends on the gig itself. But yes, we like to try and mix it up  so that if we have fans coming to multiple shows, they won’t hear the same songs in the same order every time we play. We use a 15 song base for a set. That gives us some wiggle room at the gig to see how it’s going and make adjustments on the fly, because the best plan is to plan for the plan to not go as planned and make it work from there.

And we thought you might like to try it and pick your perfect set from our song list (And I wanted to play with the polling plugin – Jim).  Below is our full song list as recently updated. Pick 15 songs that you think would be the perfect set and then click the Vote button. That’s all there is to it.  Enjoy!